I participated in a campaign on behalf of Mom Central Consulting for Jericho Books. I received a product sample to facilitate my review. 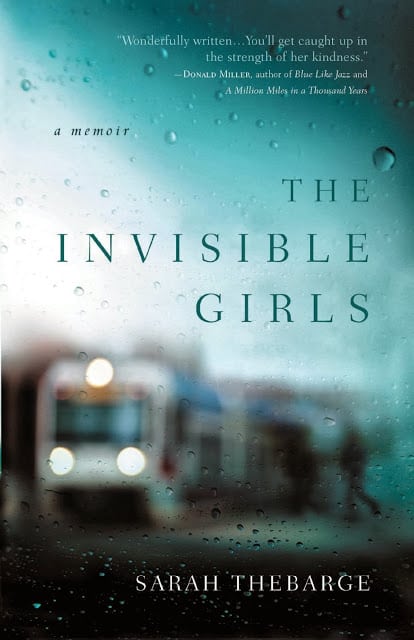 I recently had the opportunity to review Sarah Thebarge’s book The Invisible Girls: A Memoir.
Within 2 pages, I was intrigued and wanted to know more about Sarah’s story and the story of the woman with 5 young daughters that she met on the train one day.
Sarah weaves her inspirational story together with the compelling story of Hadhi, the woman she met in a way that kept me asking,”What next? What’s going to happen now?”

Sarah shares her story of battling and recovering from breast cancer.  During this time she decided to leave her job and everything she knows on the East Coast, including a heartbreaking relationship, to relocate on the West Coast near friends.   All the unanswerable “whys” that happen to Sarah in such a short time cause her to question her faith and all that she was raised to believe as a pastor’s child.
As Sarah was recovering and settling into a new life, she met Hadhi, a refugee from Somali.  Hadhi and her 5 young daughters had been abandoned by her abusive husband after they relocated to the States.  Hadhi was all alone in a strange country with no family or friends to help her learn how to live and survive in place where everything was new and different.  Things as seemingly simple as how to cook with an electric stove were strange and confusing.  And complicated tasks such as figuring out how to obtain child support from her husband were virtually impossible in a country she didn’t know and a language she barely spoke.
Through the chance meeting on the train, both Sarah and Hadhi quickly became lifelines for each other.  At first you think that Sarah has saved Hadhi and her daughters, but you quickly begin to wonder who really saved who.
As the mother of 2 daughters, my heart broke again and again for everything that both Sarah and Hadhi went through.  But my mother’s heart was also encouraged by the good that people choose to do for others and how that simple act of selflessness often blesses the giver as much as the receiver.  Sarah’s journey through questioning her faith led her to a deeper faith and confidence.
I can easily recommend The Invisible Girls: A Memoir as an easy and compelling read.  It would be a wonderful gift for anyone who enjoys inspirational stories.
You can find The Invisible Girls:A Memoir on Amazon. (affiliate link)
You can also learn more about the author, Sarah Thebarge at her website.

0shares
We use cookies to ensure that we give you the best experience on our website. If you continue to use this site we will assume that you are happy with it.OkPrivacy policy