589 shares
I just added up and we’ve celebrated 41 kid birthdays in our house.  Yes.  Forty-one!  Some of them were simple family parties, usually because we’d just moved…again.  But I’d still guess that I’ve had the stress,  uhh, challenge, uhh,  joy of putting on almost 20 children’s birthday parties.  One of my favorites, by far, was the Godzilla birthday party my son had a couple of years ago.

My son had just become enamored with old Godzilla movies and other cheesy 50’s Sci-Fi movies (probably because those were the “scariest” movies I’d let him watch at that age).   I wish that I’d taken more pictures at the pre-blogging time, but I had no idea at the time that the blogging bug would hit a year and a half later.

Since we had just moved to a new state, we had a small party (yea!) at our house with 5 boys.  We started the party with some yucky “Godzilla science experiments.” What else would you do at a Godzilla birthday party for the 8 – 10 year olds?

We made “Godzilla Spit”, which is a solid that melts when you pick it up and drips through your fingers.  The recipe was easy.  Just

Mix 1 cup cornstarch and 2 cups baking soda.  Slowly add up to 1 1/4 cup water.  Only add enough water to make the consistency so you can scoop it up with your hands.  The heat from your hands “melts” the solid so that it drips in liquid form through your fingers and then reforms into a solid in the container so you can use it again and again.  The boys had lots of fun with this gooey experiment.  Just be ready for a drippy mess.

Next we concocted “Godzilla Toots” (also goes by “Godzilla Flatulence” and “Godzilla rhymes-with-carts”).   This was another easy recipe that I had the boys help add the ingredients and then mix up with their hands.

Please be careful with is recipe in case any of the children have an allergic reaction.

In a large bowl mix 8 oz of white glue with 8 oz of water (you can just fill the 8 oz glue bottle with water) and add green food coloring to make a Godzilla-like color.  In another bowl mix 1 cup water and 1 1/2 cup borax powder until the borax is completely dissolved.   Add the borax mixture to the large bowl with the glue mixture and have the boys mix it all together with their hands until it turns into slimy putty.  Divide the mixture to give each boy a portion.   They can manipulate the putty to make it “toot” and make other disgusting noises.  The boys thought this was great fun, of course (Mom and older sisters where shaking our heads as the boys laughed and laughed over the sounds).  I found small clear craft canisters so the boys could take their Godzilla Toots home after the party.  (I know, I know.  Sorry again to those parents).
After they’d had enough fun with the science experiments, we watched  the movie, King Kong Vs. Godzilla.

We had popcorn with green decorator sugar, green candies and green drinks in green mugs.

I added black paper “toe nails” to the cups, a Godzilla looking dinosaur sticker to the lid and wrote each boy’s name in paint pen on the mugs.

After the movie, we served a Godzilla birthday cake. This is a super easy beginner’s cake since it’s supposed to look like Godzilla wrecked the city.

I made two sheet cakes and cut the cakes into “buildings.”  Before I placed the buildings, I made a road out of black construction paper and piped yellow frosting stripes down the road.  Then I placed the buildings along both sides of the street.  I learned the hard way that you should position ONE building, frost it, pipe the doors and windows THEN add the next building.  (I made the mistake of placing all the buildings and then had to contort myself to frost the buildings and pipe the windows.  Fortunately, I could say, “I meant to do that” and say the less-than-perfect frosting had been destroyed and messed up by Godzilla. Bu-ut, really it would have been easier to do the buildings one at a time.)

I used grey frosting to make buildings look scorched.   I had left-over blue spray frosting tinting, that I got in the cake and frosting aisle of my grocery store, and used it to make the buildings look like had water from burst pipes.  At the end I added crumbled Oreos to add to the charred  and damaged buildings (plus, any excuse to add an Oreo!).  Finally, I added some carefully washed Matchbox cars and the Godzilla figure.

Overall, it was fairly easy to make and a great project for a novice cake decorator like myself.  Any mistakes you make can be disguised as designed damage and destruction.

For favors, we placed toys and candy inside each Godzilla egg.

The eggs were simply balloons that were covered with paper mache.  Once the paper mache dried, we painted them.  Once the paint was dry, we carefully popped the balloon, cut the egg open, added the treats and then patched the cut closed with more paper mache and touch up paint.  The hardest part was being patient and waiting until each step was thoroughly dry.

We hid the eggs outside and the boys went on a hunt to find Godzilla’s eggs.  The boys got to crack the eggs open and discover the treats.  The egg hunt and the eggs were a big hit.

This Godzilla birthday party theme could easily “grow up” for an older child or a Godzilla fan of any age.  And, really, who doesn’t love Godzilla? 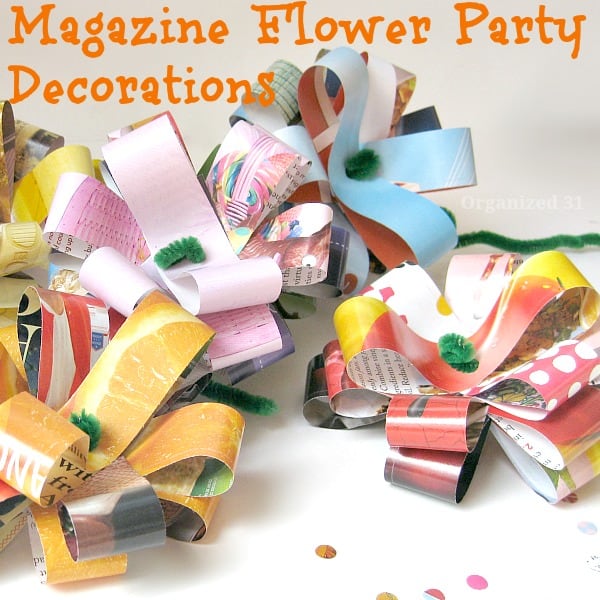 Put old magazines to use making these simple magazine flowers. A great project for children or beginning crafters. 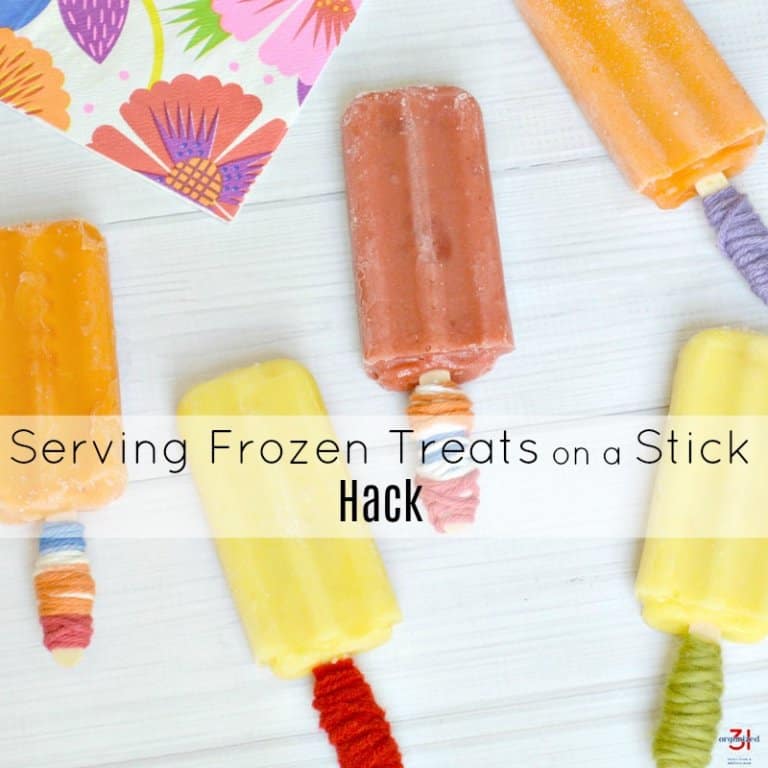 An easy hack for frozen treats on a stick. Dress up the popsicle stick to match party decor & make holding the treat more comfortable. 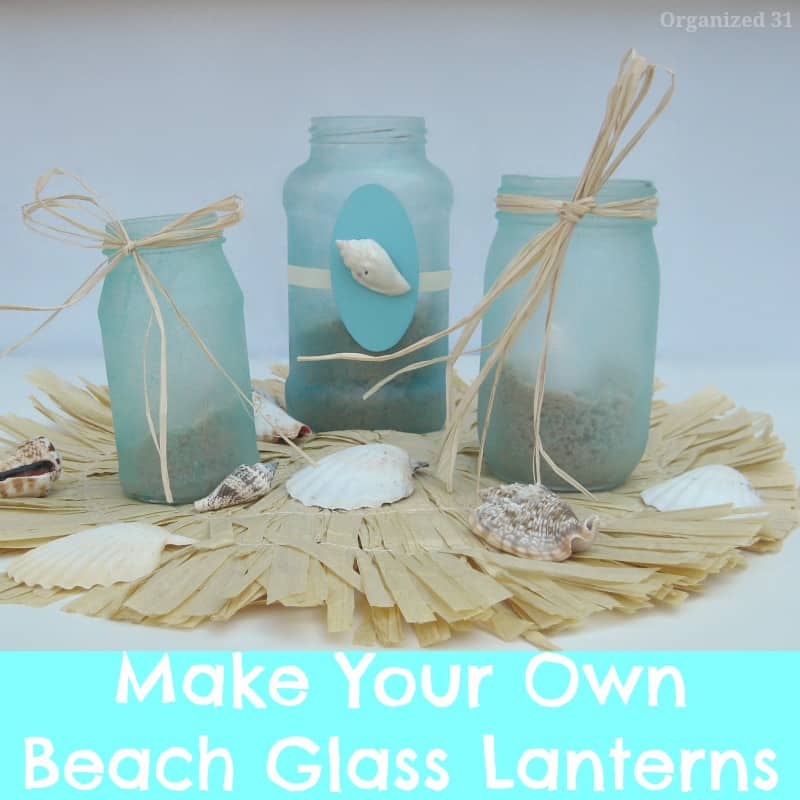 I grew up in Hawai’i. It’s home and it’s paradise.  Really.  My daughters have both danced hula and if you know anything about hula, the hula seestahs are a close-knit bunch.  Several months ago one of my daughter’s hula sisters had a sweet sixteen party (happy birthday, Kamalani!) and her mother asked if I could help with… 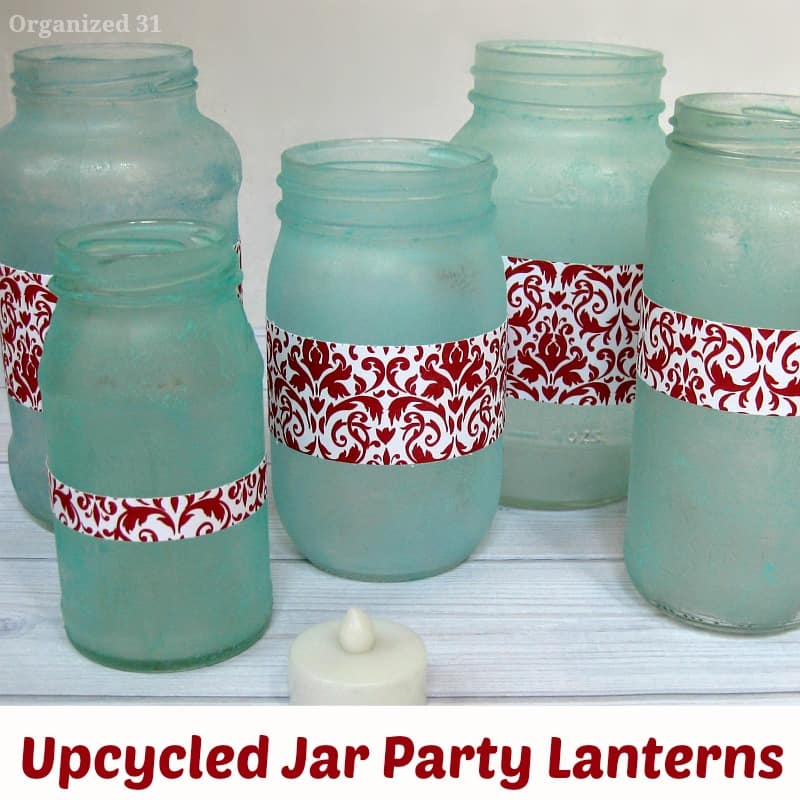 It’s June and that means outdoor party season.  We have a big graduation party coming up this month and I wanted to make outdoor lanterns to decorate the tables and provide a little ambiance.  I had made some adorable beach lanterns for a friend’s party a few months ago.  I used repurposed glass jars to… 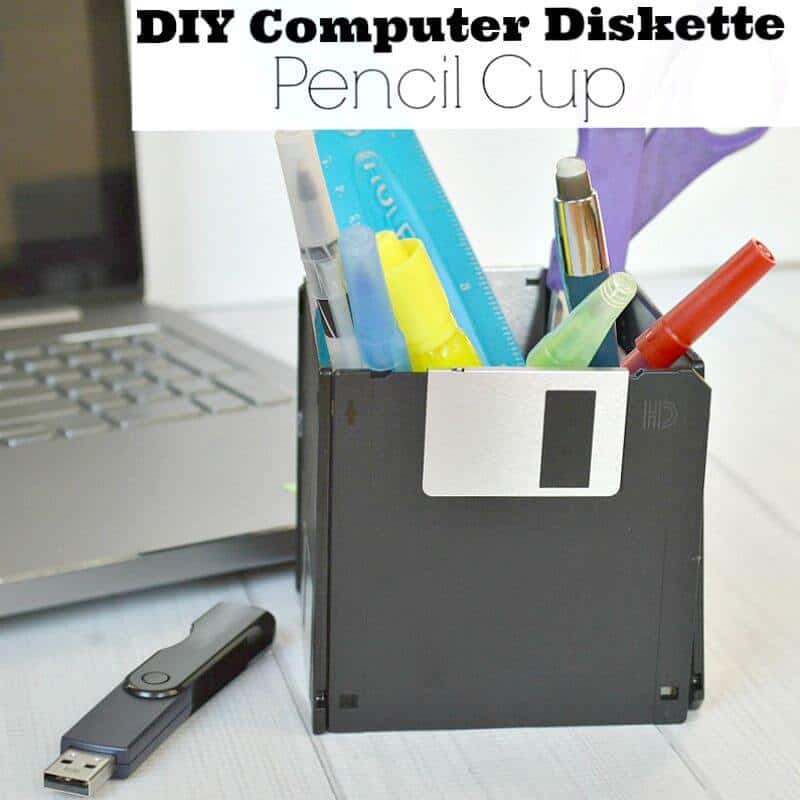 Use recycled computer diskettes to make a DIY pencil holder. This fun craft is perfect for your retro tech nerds or pop culture fans. 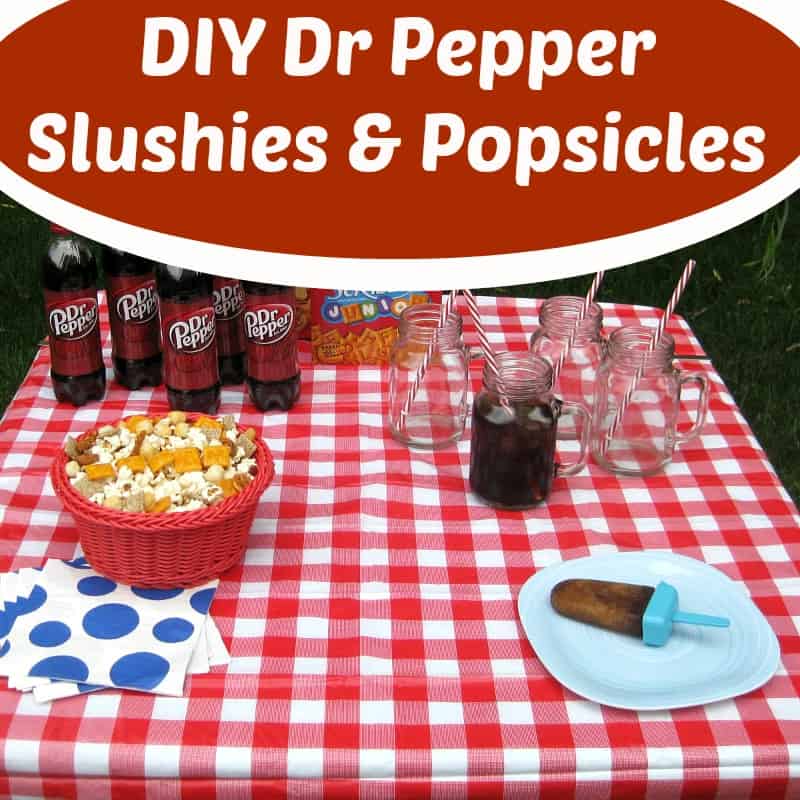 This shop has been compensated by #CollectiveBias, Inc. and its advertiser.  All opinions are mine alone.   For more ideas on how to create your own #BackyardBash, check out the tumblr page at www.drpepperbash.com. With 2 teens and a tween, I’m always looking for ways to make it fun for the kids and their friends to…