The first argument my husband and I ever had was about how the spices were stored in the kitchen. Really.  Not very exciting or dramatic, but true.

I had alphabetized the spices, of course, doesn’t everybody?  My husband did almost all the cooking at that point in our marriage due to work schedules (I don’t miss the crazy work schedules, but I do miss his cooking!).  My husband had not been returning the spices to their correct alphabetized location.  I was upset that he was haphazardly putting the spices away and he didn’t understand why he couldn’t put them wherever he wanted to since he was doing the cooking.

Luckily, that first fight wasn’t a very big one and we’re still happily married 24 years later (attributed to my organizing, of course), but the story makes us both laugh and yes, my spices are alphabetized.

Every time the military moves us, I get to set up a new kitchen.  Setting up my spices is one of the first things I consider.  Soon after the “great spice debate” I bought a two-tier Lazy Susan that has organized our spices for 20+ years.  So the first thing to consider is where the Lazy Susan will fit (since it is two-tiered, it’s not always easy to place).  In addition to the simple, “Where will it fit and where makes sense in the kitchen layout,” I consider where I can I keep the spices that is away from direct sunlight, heat and excessive humidity.  In my current kitchen that place is a corner cabinet near the cooktop, but not right next to it.

It’s one of those awkward corner cabinets that nothing quite fits in well.  Fortunately, the lazy Susan  fits the space.  When I first set this cabinet up, the 2-tiered Lazy Susan was in the center of the shelf. Wasting lots of space.  I added the clear box on the left to hold spices that wouldn’t fit on the lazy Susan.  Recently, I added the 1-level Lazy Susan that’s in the center back of the shelf. 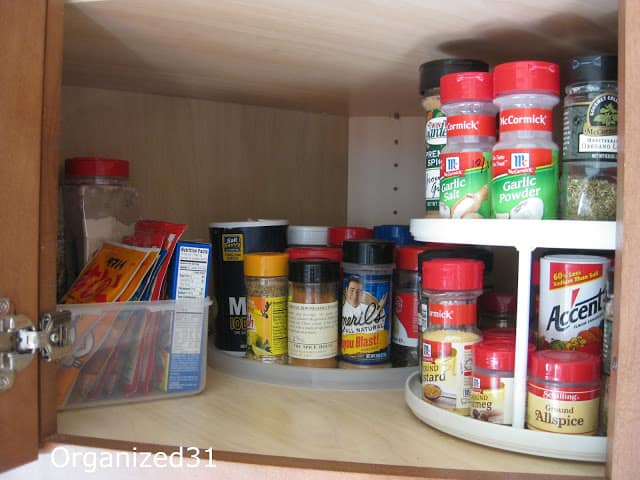 I’m happy with the current set-up of the cabinet.  Everything is easily visible and reachable.  I can find any spice you might ask for in under 3 seconds.  Really.  Try me.

The 2-tier Lazy Susan holds most of my spices.  The bottom rack holds as many of the spices as I can fit on it starting with “a” (I start filling up the lower level first because I’m 5’3″, don’t need to explain further).  Less frequently used spices go on the inside of the circle with the spices used most frequently on the outer part of the circle (you can see that Accent is behind Allspice because I rarely use Accent, even less often than Allspice).  The top tier holds taller bottles that won’t fit on the lower tier and the rest of the alphabet.

The 1-level lazy Susan in the Center holds “special” spices and spice blends plus bottle that wouldn’t fit on either level of the 2-tier Lazy Susan.  These spices are easily accessed and the Lazy Susan makes efficient use of all that awkward space in the back of a not-square cabinet.  It also keeps spices from getting lost in the hard-to-reach deep recesses of the cabinet.

The clear box is a container that lost its lid during the last move.  It was no longer useful in storing food, but has now found a use corralling more spices.  I put those over-sized Costco spice bottles(see one way in the back), any loose packets and boxes or anything that would fall over on the Lazy Susans.  The clear box can be pulled out  to grab whatever I need.  I can also easily lift the box down and place it on the counter to restock or organize the contents.

If this was my permanent home, I’d install some type of bins or baskets on the back left wall near the top (where the wasted space is).  I would then put the loose packets in those bins.  But since this is only my home until the military moves us again, I’m very happy with the current set-up. 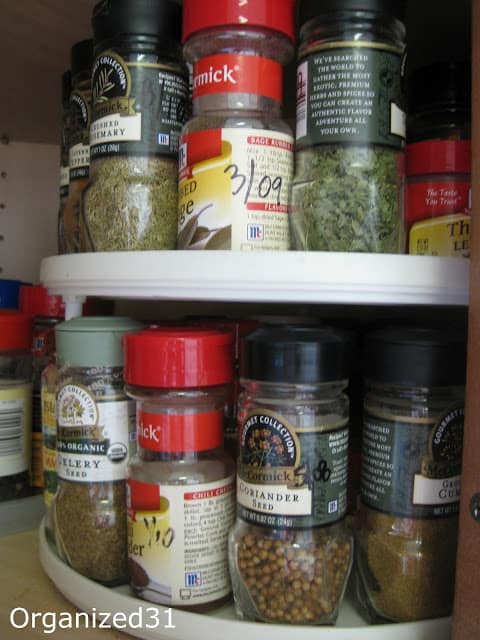 My very organized Mom reminded me to point out the dates marked on the sides of my spice bottles.  About 8 years ago as I was organizing the spices in a new kitchen after yet another move, I realized that I had spices from when I first got married (they had witnessed  the “great spice debate”!).  I started looking at all my spices and realized that I had no idea how old any of them were except the original ones that were 15 years old (much too old to be very tasty).

That’s when I started marking the month and year on the right side of the label when I open a new spice bottle.  (I do the same with condiments in the pantry and refrigerator.)  As I sit here in my office looking at this picture of my spices, I see dates from 2008 and 2009.  …….. I just had to stop and google the recommended shelf life for coriander seeds and sage leaves.  According to stilltasty.com, it’s 1-3 years for the sage and 3-4 years for the coriander.  Guess I need to take 5 minutes and go through all my spices and then head off to the grocery store.  Good thing I marked those dates on the bottles!

(And, yes, I have been smiling each time I’ve typed Lazy Susan.  My children think that’s a hysterically funny name for an organizing tool that I, Susan, love.) 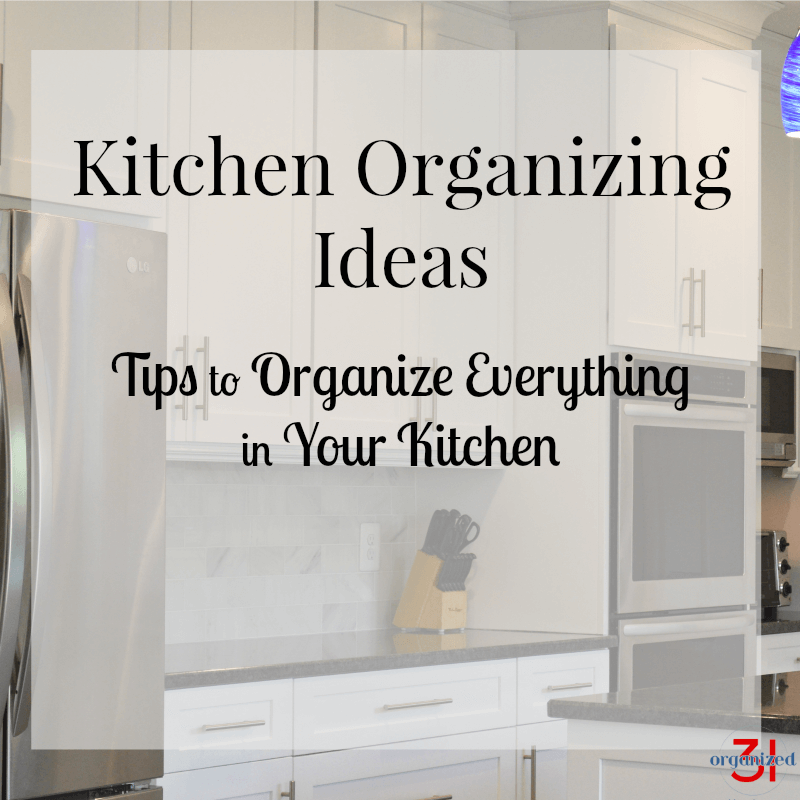